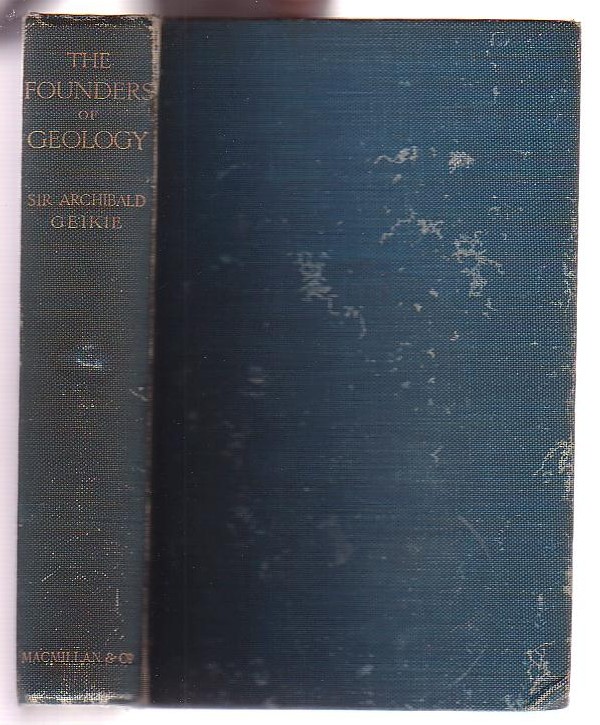 The Founders of Geology

Rubbing and flecking to cloth boards. Gutters split at inner hinges. Previous owner's signatures, "J T Jutson" (Australian geologist 1885-1959), "J. J. Jenkin". A few spots of foxing. ; xi, [1], 486 pages + [2] pages advertisements. Blue cloth boards. Page dimensions: 226 x 141mm. "Presentation Copy" circular blindstamp on the title page. This is the second edition, considerably expanded from the first edition of 1897. "While retaining and also enlarging the more detailed discussion of the remarkable period embraced in the original lectures, I have given a sketch of the earlier progress of geological ideas, from the times of ancient Greece onwards to the epoch that formed the starting point of my former volume." - from the Preface to the 1905 edition. Selected contents: Geological ideas among the Greeks and Romans; Avicenna and the Arabs; Early Observers in Italy - Leonardo da Vinci, Faolloppio, Steno, Moro; The English cosmogonists; Scientific Cosmogonists; Speculations of De Maillet and Buffon; Early illustrated works on fossil plants and animlas; The Rise of Geology in France; The Foundation of Volcanic Geology; The Wernerian School; The Rise of the modern conception of the theory of the Earth - Hutton, Playfair; Birth of Experimental Geology; The Rise of Stratigraphical Geology and of Palaeontology in France; The Rise of Stratigraphical Geology in England; Sedgwick and Murchison; Influence of Charles Darwin; Louis Agassiz; Development of Geological map-making in Europe and North America; The Rise of Petrographical Geology; Conclusion. ; 8vo

Title: The Founders of Geology

The Founders of Geology