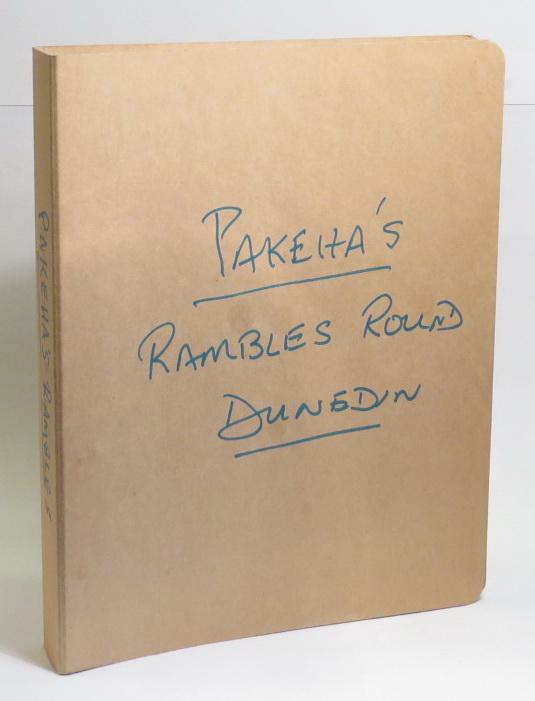 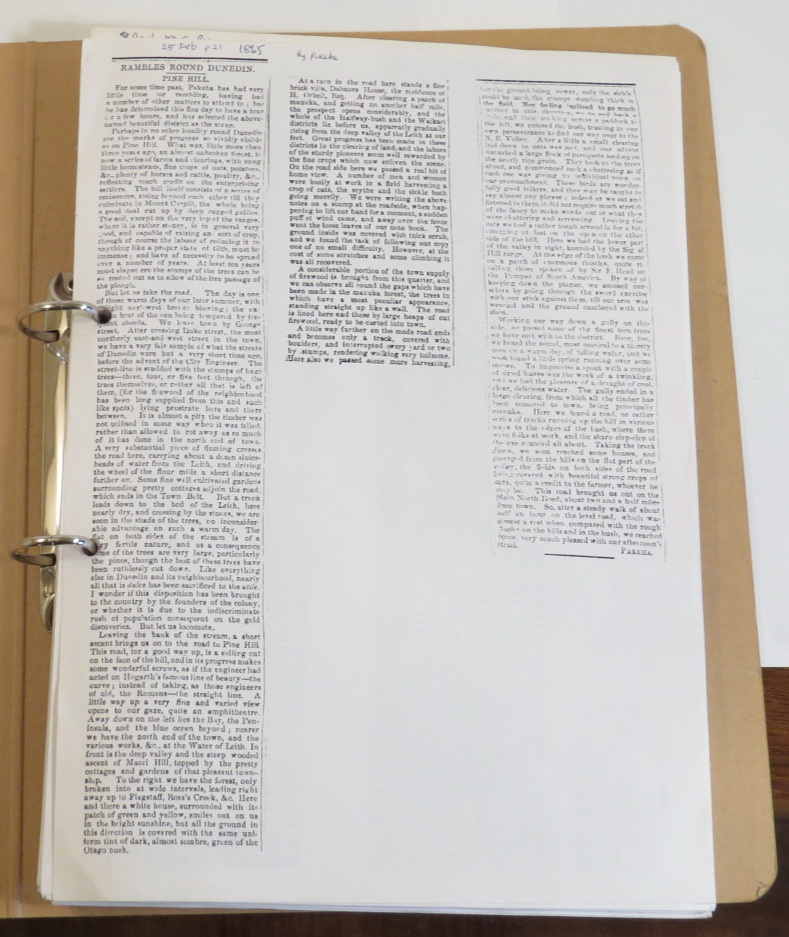 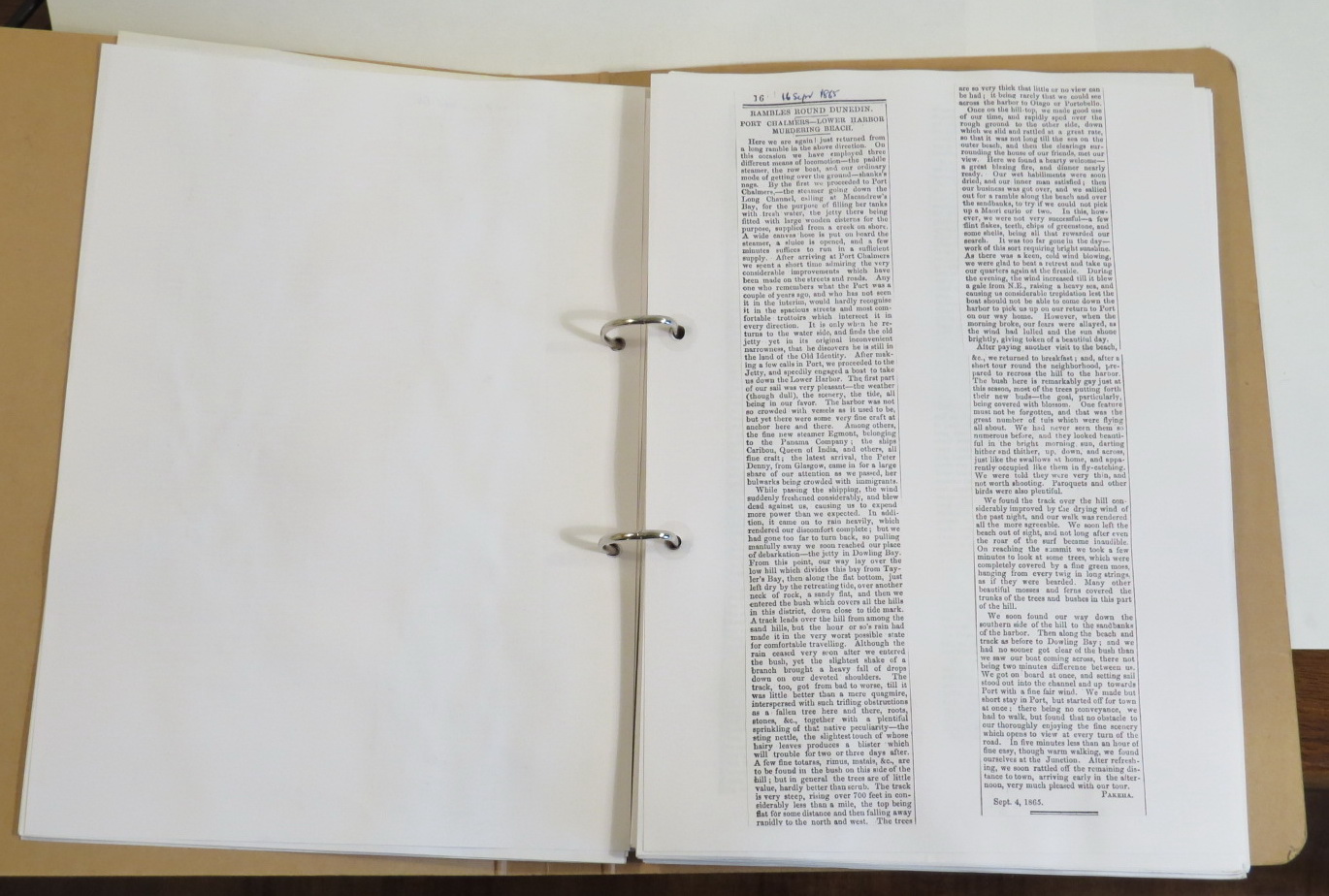 A ring-bound folder of xeroxed copies of "Pakeha"'s column "Rambles Round Dunedin". Photocopied from the Otago Witness newspaper. 25 February 1865 - 26 October 1872. Compiled by George Griffiths. 44 leaves, clippings pasted on one side of leaf only. Descriptions of walks around Dunedin and its neighbouring hills and beaches, including the Otago Peninusla. "As we neared the top of the ridge, we became enveloped in fog, and the rain began to take off. Now and then we could see, away on our right, the high rocky peaks of Mihiwaka and the Hump, the mist driving past them with great speed, though we hardly felt a breath of wind on the road." - 13 January, 1872. "This part of of our walk was very pleasant; the tide being low, we had firm smooth sand to tread on, so we were not long in reaching the mouth of the Kaikorai, which was found in a very quiescent state, about 10 or 12 yards wide, running swiftly, but quite smooth." - 17 February 1866. Peter Thomson was the founder of the Dunedin Naturalists Club, and Vice-President of the Otago Institute. The folder includes copies of all of the "Rambles Round Dunedin" columns, as listed in Griffiths (1998). [Bibliographical reference: Pakeha (1) in Griffiths (1998) "Southern Writers in Disguise: A Miscellany of Journalistic and Literary Pseudonyms".]

Title: Rambles Round Dunedin [collection of xeroxed copies of this column from the "Otago Witness" newspaper] 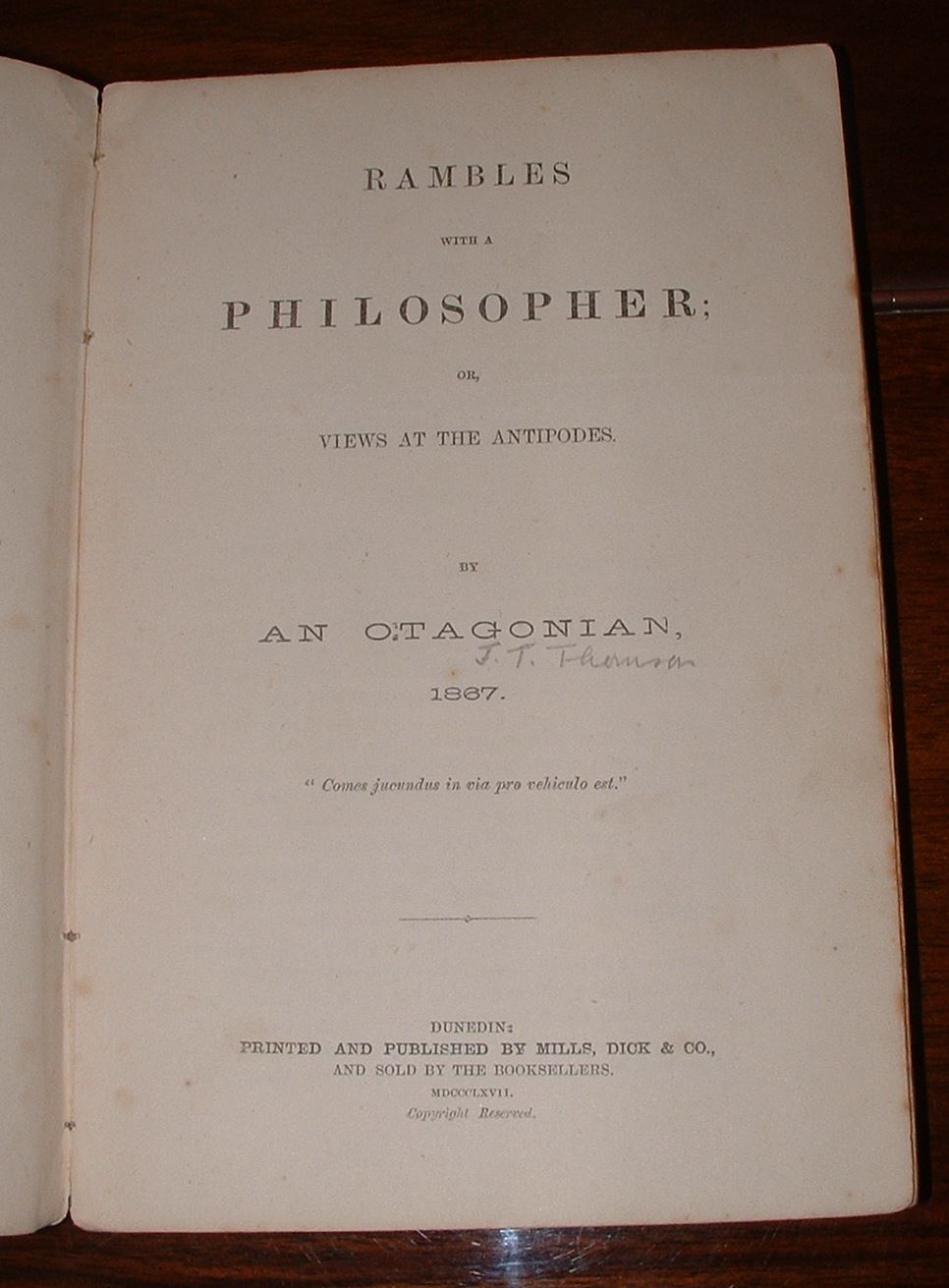 Rambles with a Philosopher; or, Views at the Antipodes

By: An Otagonian [pseudonym of John Turnbull Thomson] 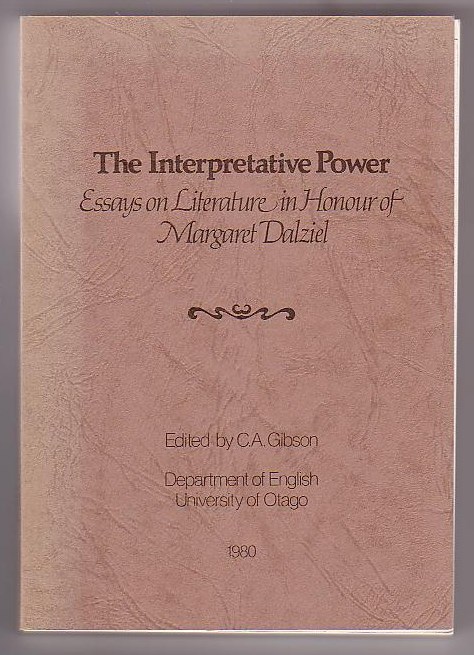 The Interpretative Power: Essays on Literature in Honour of Margaret Dalziel 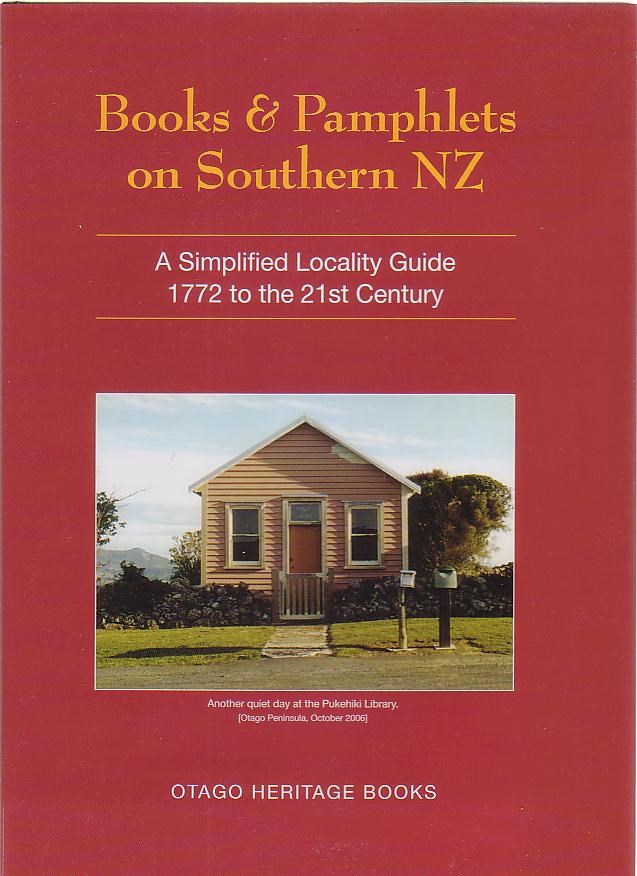 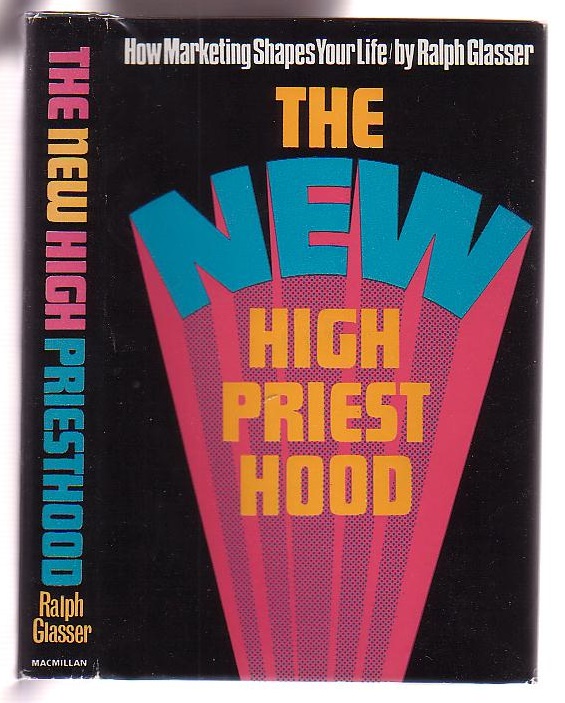 The New High Priesthood: the social, ethical and political implications of a marketing-oriented society 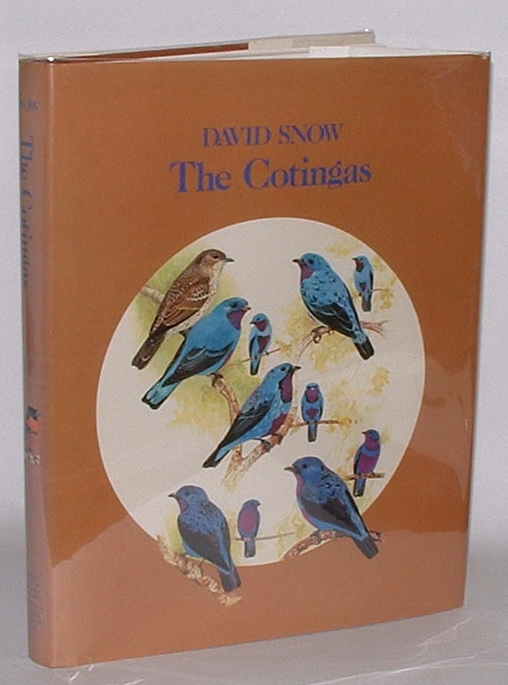 The Cotingas: Bellbirds, Umbrellabirds and Other Species 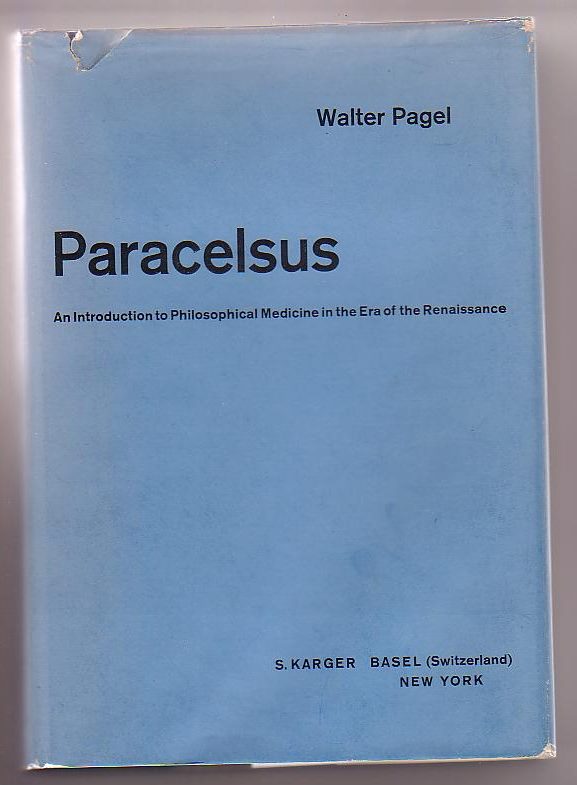 Paracelsus: An Introduction to Philosophical Medicine in the Era of the Renaissance 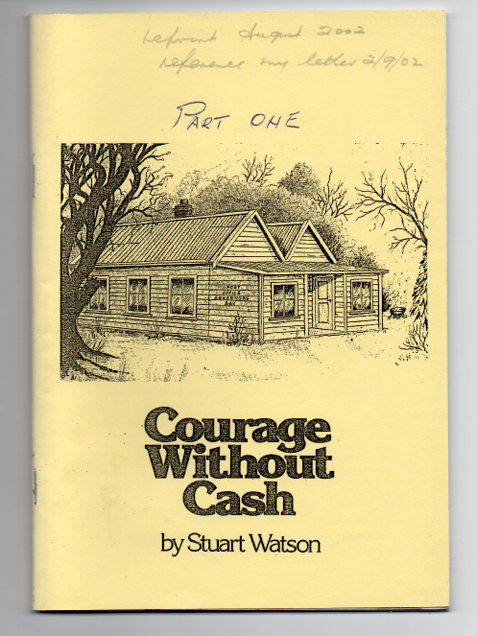 Courage Without Cash [Part One]