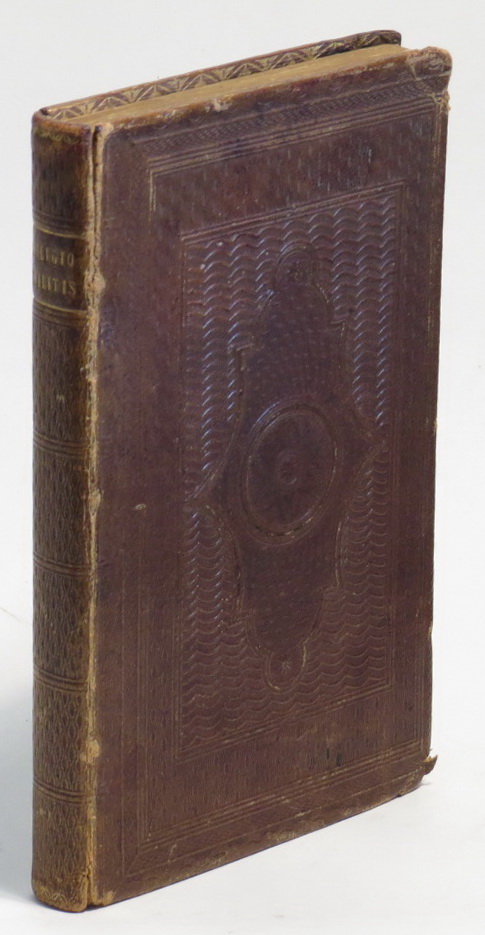 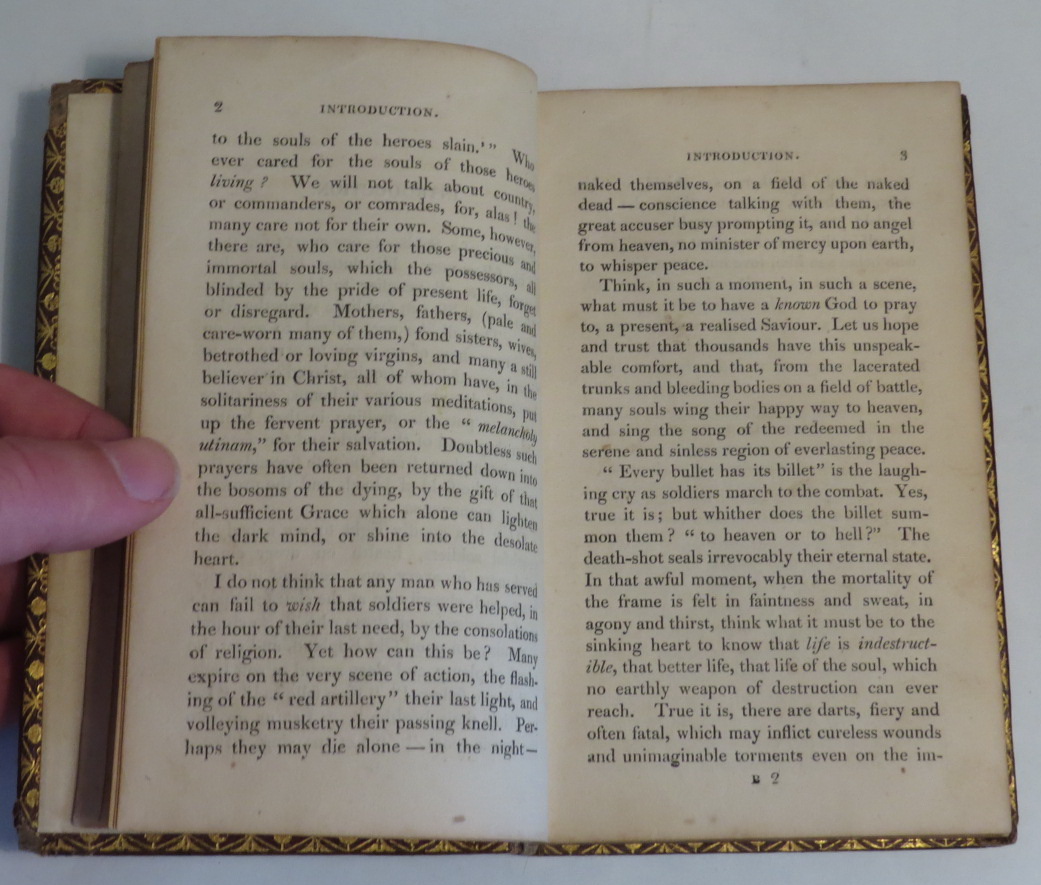 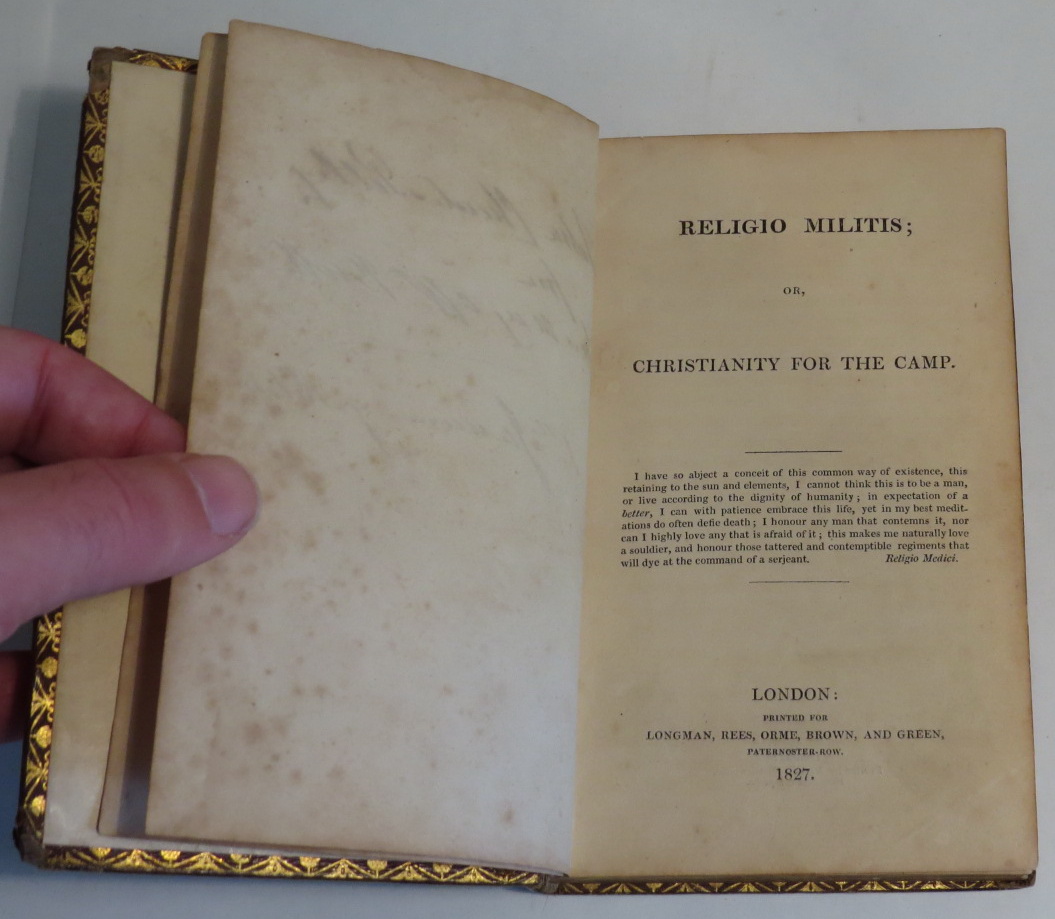 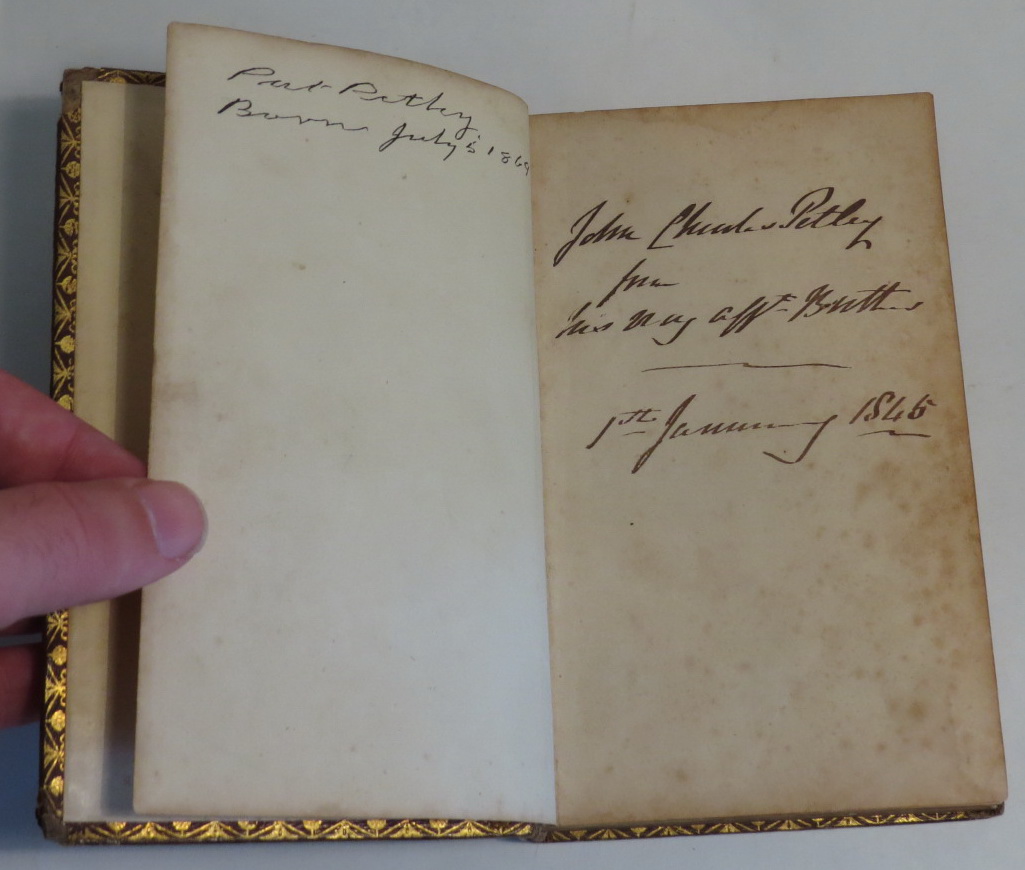 Religio Militis; or, Christianity for the Camp

Some splitting to front joint. Small loss of leather at tips of corners of boards. Rubbing to joints and edges of boards. Some bruising to corners of boards. Gutter starting at front hinge. Previous owner's inscription "John [?] Petley / from his very afft. brother / 1st January 1845". Another owner's signature "Pat Petley / Born July 5 1869". Some foxing. Marginal 1/2" tears to a couple of leaves, without loss. ; Uncommon - we can find on WorldCat 4 copies in UK libraries, and 2 in US libraries. An anonymous work. v, [1], 151, [1] pages. Contemorary full leather binding, with blind-stamped decorative panels on boards, and blind-stamped pattern to spine. Spine titled in gilt "RELIGIO / MILITIS", with some gilt decoration at head and tail of spine. Gilt dentelles. All page edges gilt. Page dimensions: 151 x 92mm. Theological musings, relating Christianity and military life. "Let no man, unacquainted with military life, judge me for the manner of this performance. I feel my intention to be pure. The beam in mine own eye has always troubled me more than the mote in my brother's. I wonder not that military men have so little religion, but rather that, amid all the glitter of parade and the sounding of trumpets, they retain so much." - from the Preface. "On the midnight watch upon the deck of his transport, on the still picket of the night, with the fires of an enemy's camp burning faint before him, the wakeful soldier cannot choose but think." - page 138. Chapter titles: Introduction; On War; On One Great Difficulty of Entertaining Christianity in the Army; On Humility; On Belief in God; On the Worship of God; On Prayer; On the Practice of the Presence of God; On the Care of Time; On Lawful Pleasures; On Faith in Christ; On Hope; On Charity; On the Bible; The Life of a Soldier; The Death of a Soldier. The title page has a quote from Sir Thomas Browne's "Religio Medici" (1643) - "[. . .] this makes me naturally love a souldier, and honour those tattered and contemptible regiments that will dye at the command of a serjeant." [Bibliographical reference: Keynes, "Sir Thomas Browne" (1968) - Religio Medici, Imitators, page 252 - "Moyle Sherer (1789-1869) was a Wykehamist, who served in the army until 1836. He lived at Claverton Farm, Bath, and wrote Sketches of India, a Life of Wellington, Romances, &c."; from Wikipedia entry on Sherer, accessed April 2016: "In 1809 his corps was ordered to Portugal, and was soon engaged in the Peninsula War. The regiment took part in the Battle of Albuera, the Battle of Arroyo dos Molinos, and the Battle of Vitoria. In the summer of 1813, Sherer was taken prisoner at the Battle of Maya, and was removed to France, where he remained for two years, living chiefly at Bayonne. Writing Career - In 1818 the 34th went out to Madras (present-day Chennai), and from there Sherer sent home the manuscript of his first book, 'Sketches of India'. It was published in 1821, and went through four editions. He returned to England in 1823 and, encouraged by his success, produced 'Recollections of the Peninsula', which was also popular and reached a fifth edition.In 1824 his 'Scenes and Impressions in Egypt and Italy' followed, an account of his pioneering experience of an overland route. In 1825 Sherer turned to fiction, and wrote 'The Story of a Life', in 2 volumes, which passed through three editions. In the same year a visit to the continent produced a volume entitled 'A Ramble in Germany' (1826). While in India, Sherer had acquired evangelical religious views, and, anxious to promote them among his comrades in the army, published in 1827 a treatise, 'Religio Militis'. In 1829 he returned to fiction, and brought out 'Tales of the Wars of our Times', in 2 volumes. This work proved less successful than some of its predecessors. Of a 'Life of Wellington', which he contributed to Dionysius Lardner's 'Cabinet Cyclopdia', 18302, the first volume passed through three editions, and the second through four. In 1837 he published his final work of fiction, 'The Broken Font', set in the English Civil War (2 volumes), which was less successful. In 1838 he produced a volume of extracts from his earlier works, named 'Imagery of Foreign Travel'."]

Title: Religio Militis; or, Christianity for the Camp

Religio Militis; or, Christianity for the Camp