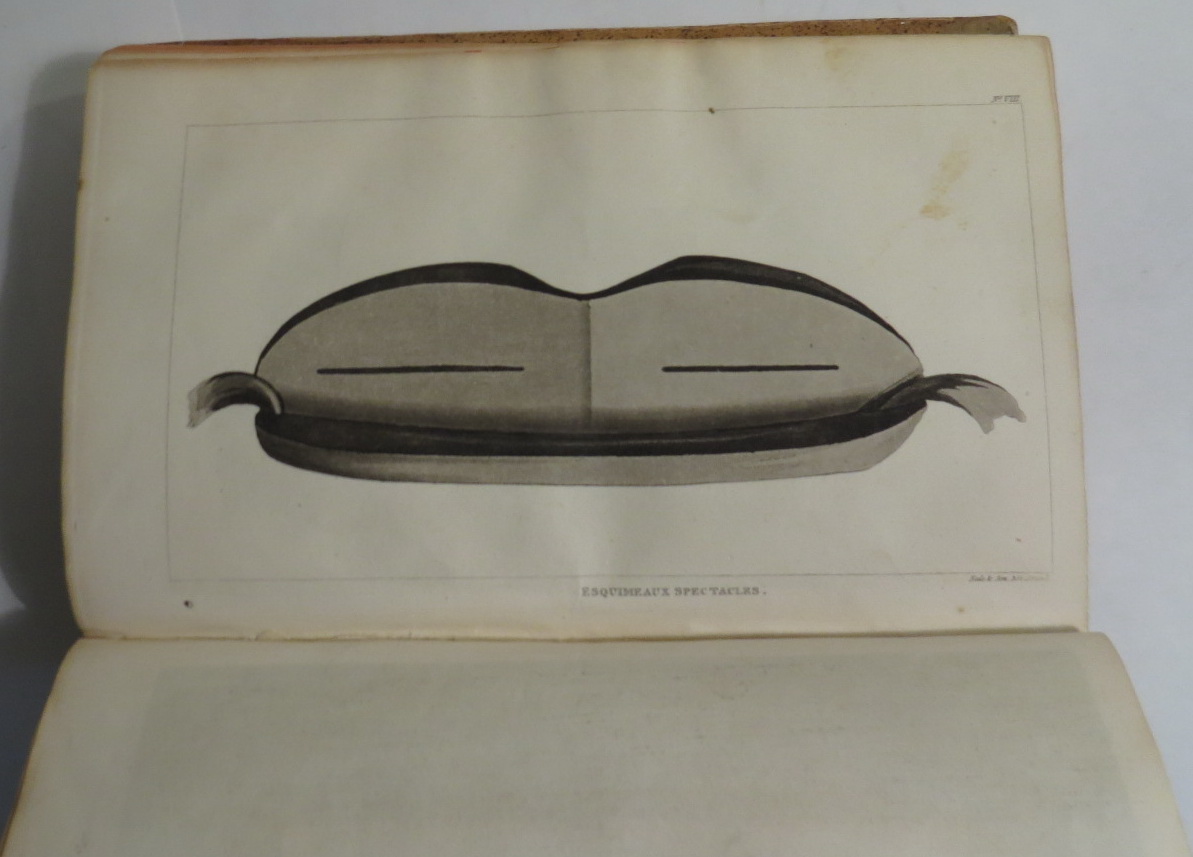 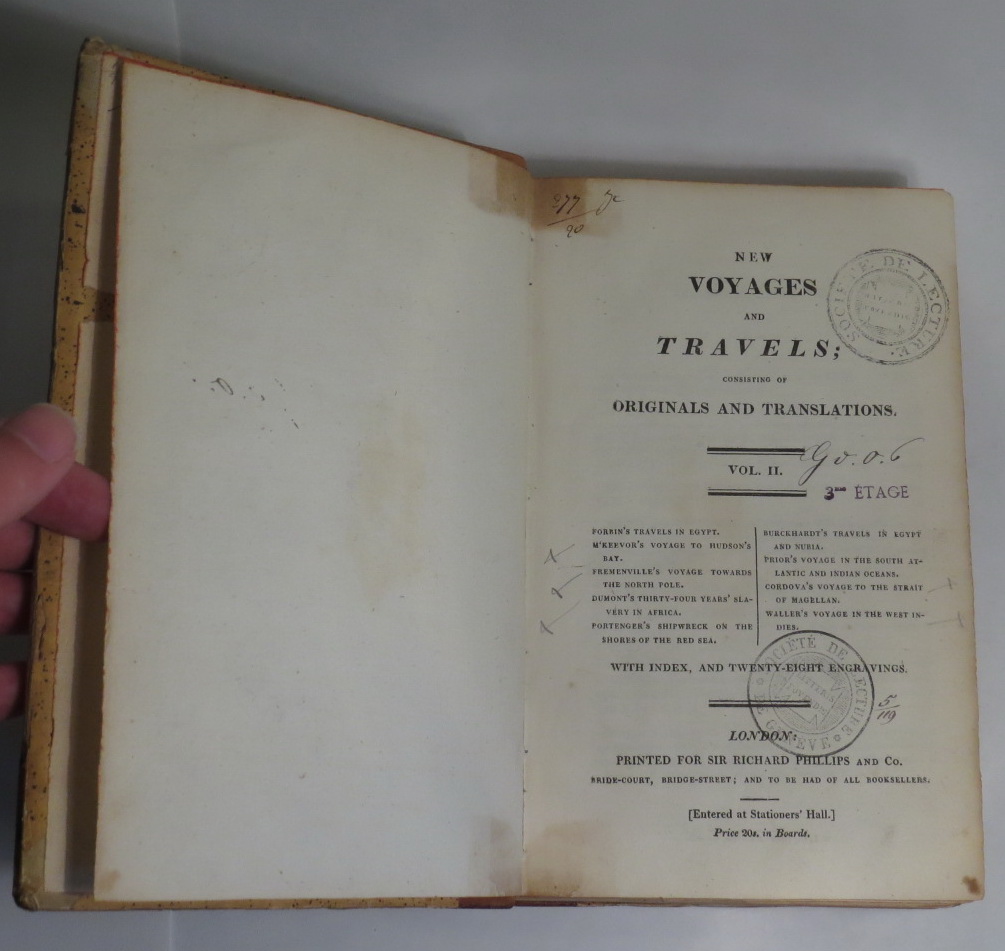 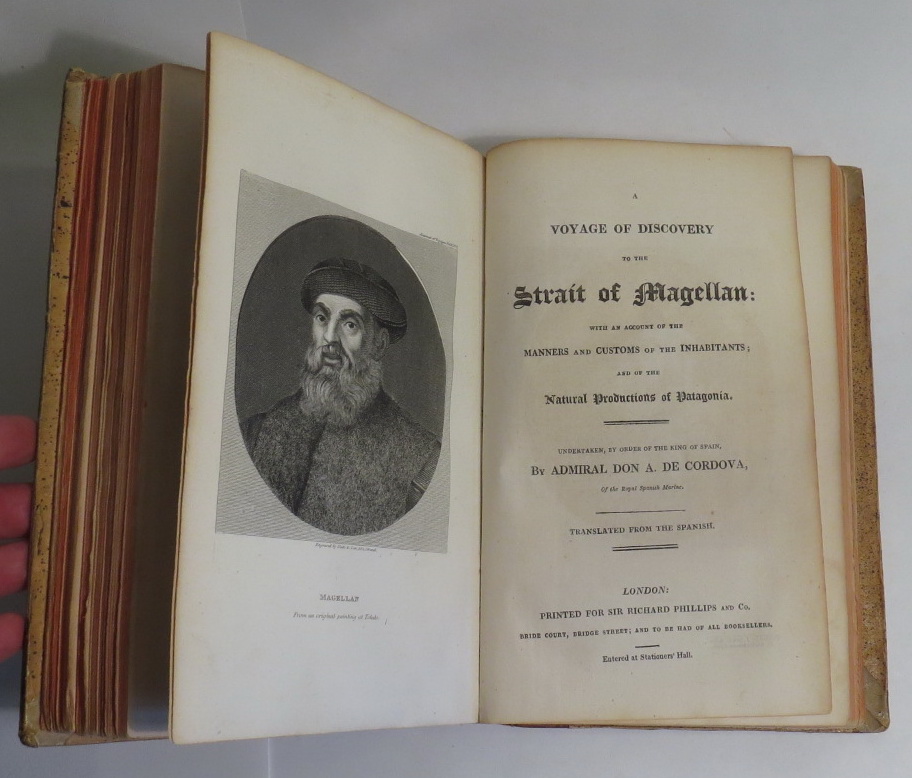 Lacking 3 plates. Ex-institutional collection, "Societe de Lecture de Geneve" with rubber stamps on main title. Near contemporary 19th century quarter leather and paste-paper boards. Lettering piece on spine split with small losses. Page dimensions: 214 x 132mm. Page edges dyed red. Some rubbing to joints. Moderate rubbing and wear to edges and corners of boards. Gutters split at endpapers. ; This volume is divided into 8 individually paginated sections, each with their own part title leaf. The imprints on the part titles are either undated, dated 1819, or dated 1820. The volume is lacking 3 plates in total. Lacking two plates from McKeevor's "Voyage to Hudson's Bay" - the frontispiece "Island of Resolution", and the final plate "A Moonlight Scene on the Ice." Also lacking one plate, "View of the Town and Fort of Mosambique", from Prior's "Voyage to the South Atlantic and Indian Oceans". The "Chart of the Route of the Nisus plate", also from Prior's "Voyage", has been backed with thicker paper; and the following plate also has paper backing a 3" tear along one of the folds. The plate "Slaves in Barbadoes" in Waller's "Voyage in the West Indies" has been cropped at the upper margin, with loss to some of the printed area of the plate. Waller also has a 2" tear without loss to the title leaf. Contents: I. "Travels in Egypt [. . .]" by Count de Forbis; II. "A Voyage to Hudson's Bay, during the Summer of 1812 [. . .]" by Thomas M'Keevor. This is followed by Freminville's "Voyage to the North Pole", which is continously pagination from M'Keevor's "Voyage", but with a separate title page. III. "Narrative of the Thirty-four Years' Slavery and Travels in Africa" by P. J. Dumont. IV. "Narrative of the Sufferings and Adventures of Hendrick Portenger, a Private Soldier of the late Swiss Regiment De Meuron, who was wrecked on the Shores of Abyssinia, in the Red-Sea" by R. De May. V. "Travels of M. Burckhardt, in Egypt and Nubia". VI. "Voyage along the Eastern Coast of Africa, to Mosambique, Johanna, and Quiloa; to St. Helena; to Rio de Janeiro, Bahia, and Pernambuco, in Brazil" by James Prior. VII. "A Voyage of Discovery to the Strait of Magellan; with an Account of the Manners and Customs of the Inhabitants; and of the Natural Productions of Patagonia, undertaken by order of the King of Spain" by Admiral Don A. De Cordova. VIII. "A Voyage in the West Indies: containing various Observations made during a residence in Barbadoes, and several of the Leeward Islands; with some Notices and Illustrations relative to the City of Paramarabo, in Surinam" by John Augustine Waller. Pagination of the entire volume: xii preliminary leaves; Forbin - [iv], 95, [1] pages + 7 plates (including folding frontispiece "General View of the Pyramids of Gheza; M'Keevor - [iv], 76 pages + 4 only of 6 plates. The 4 plates are bound in following de Freminville; de Freminville - [iv], (77)-96 pages; Dumont - vi, 42 pages + frontispiece; de May - 28 pages; Travels of M. Burckhardt - 32 pages; Prior - [(iii)-v (advertisements)], [1 (errata)], 114 pages + 2 folding maps, lacking 1 plate (View of the Town and Fort of Mosambique); de Cordova - viii, 104 pages + frontispiece + 1 folding map; Waller - [iv], 106 pages + 6 plates + 1 map (the plates and the map all bound in at rear). 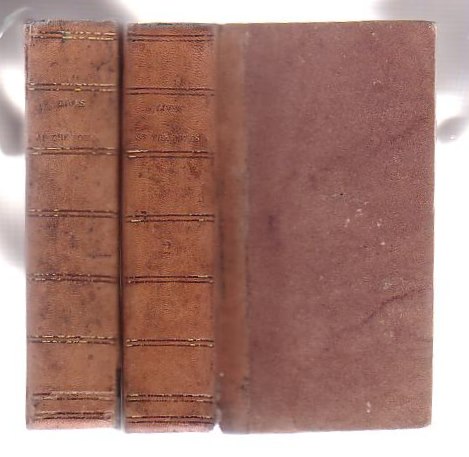 The Lives Of The English Poets (Two Volumes) 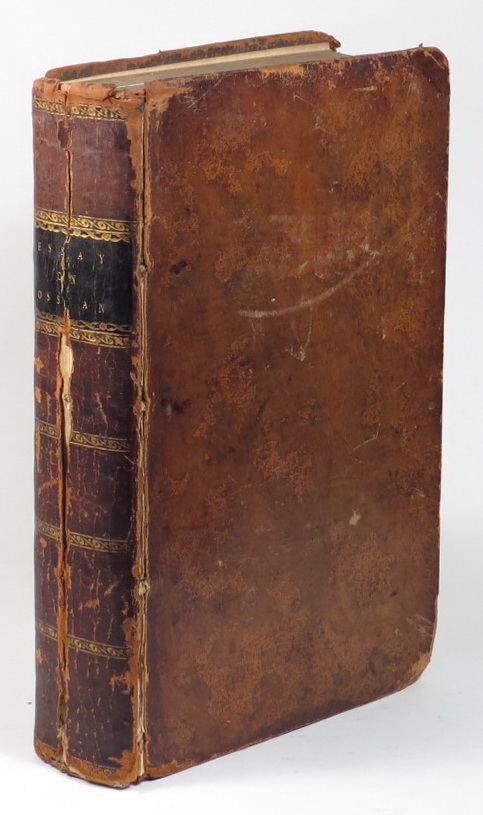 Essay on The Authenticity of the Poems of Ossian; in which The Objections of Malcolm Laing, Esq. are Particularly Considered and Refuted 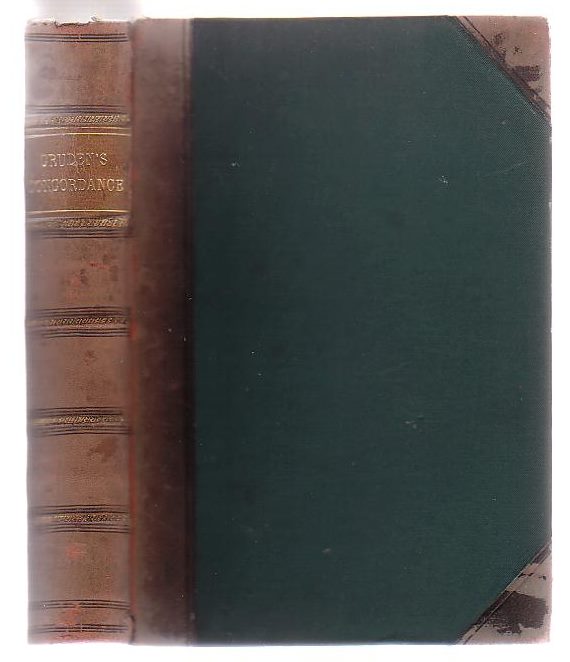 New And Complete Concordance To The Holy Scriptures, On The Basis Of Cruden 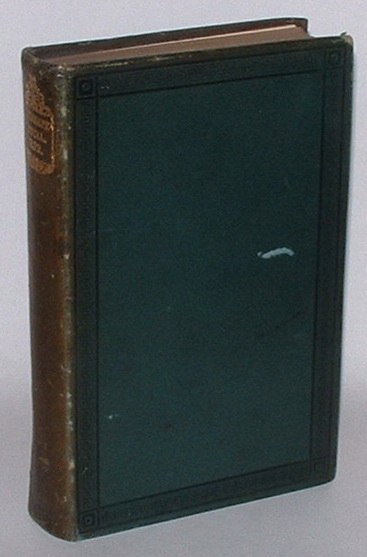 The Tourist in Italy

By: Roscoe, Thomas; illustrated from drawings by J. D. Harding 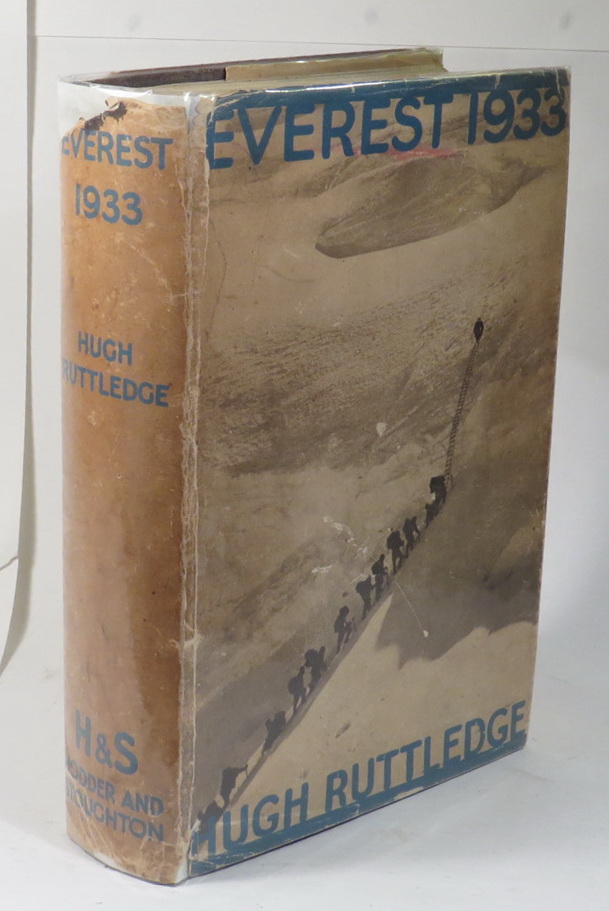 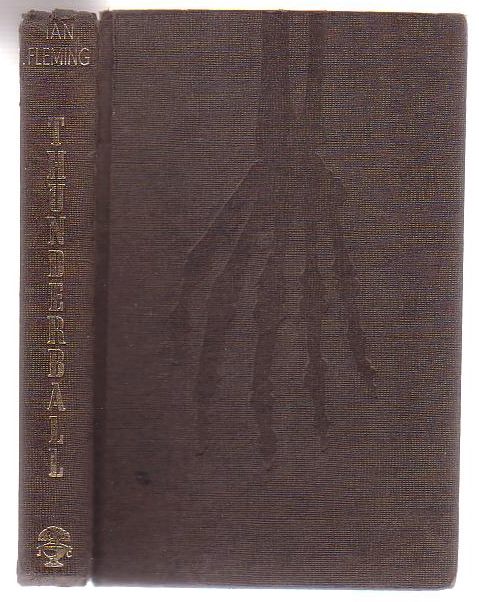