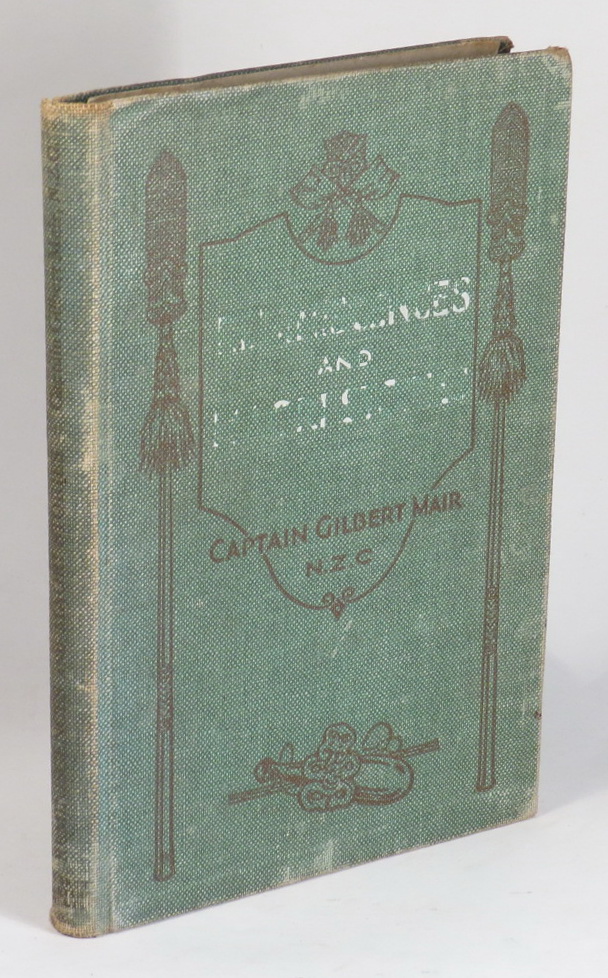 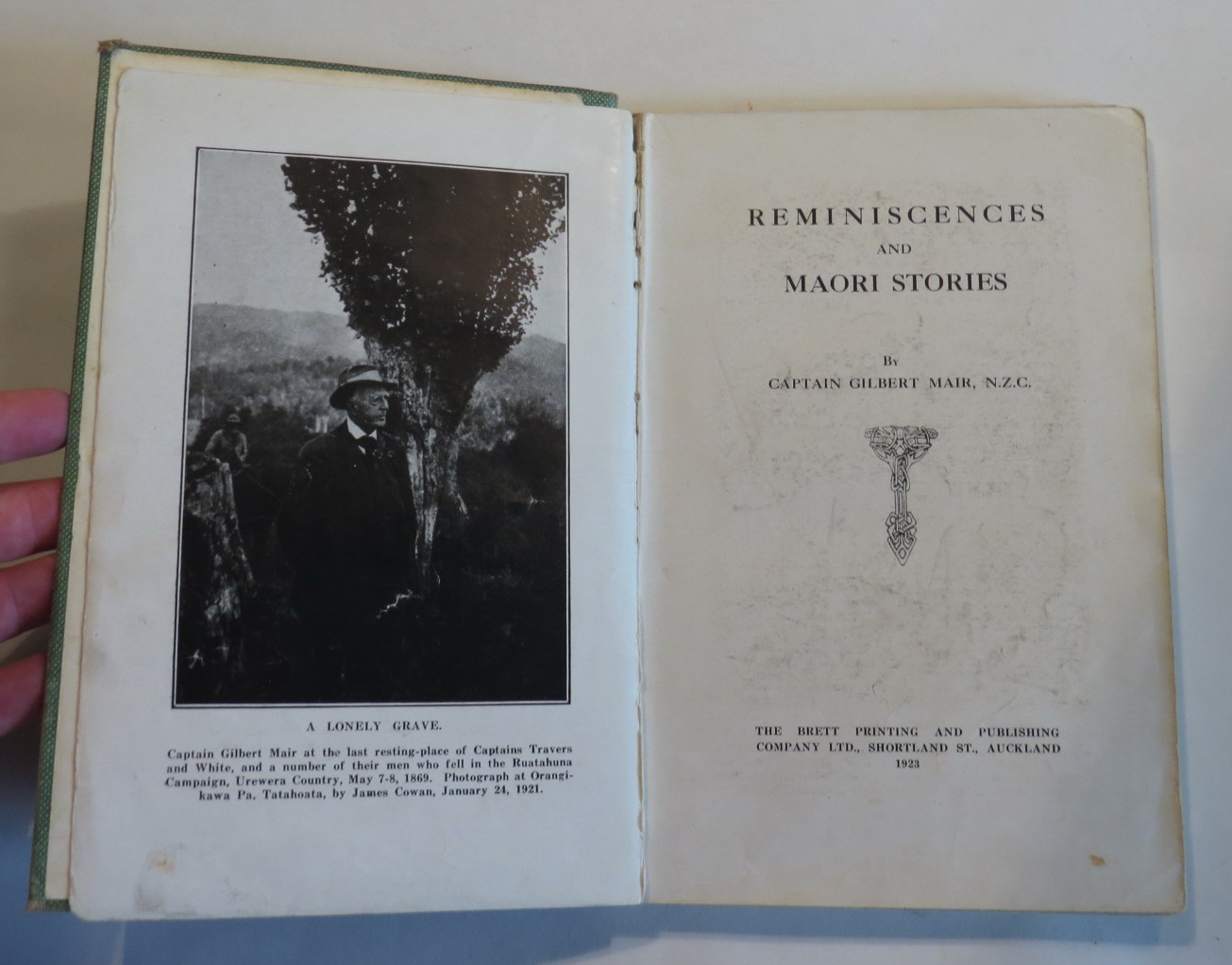 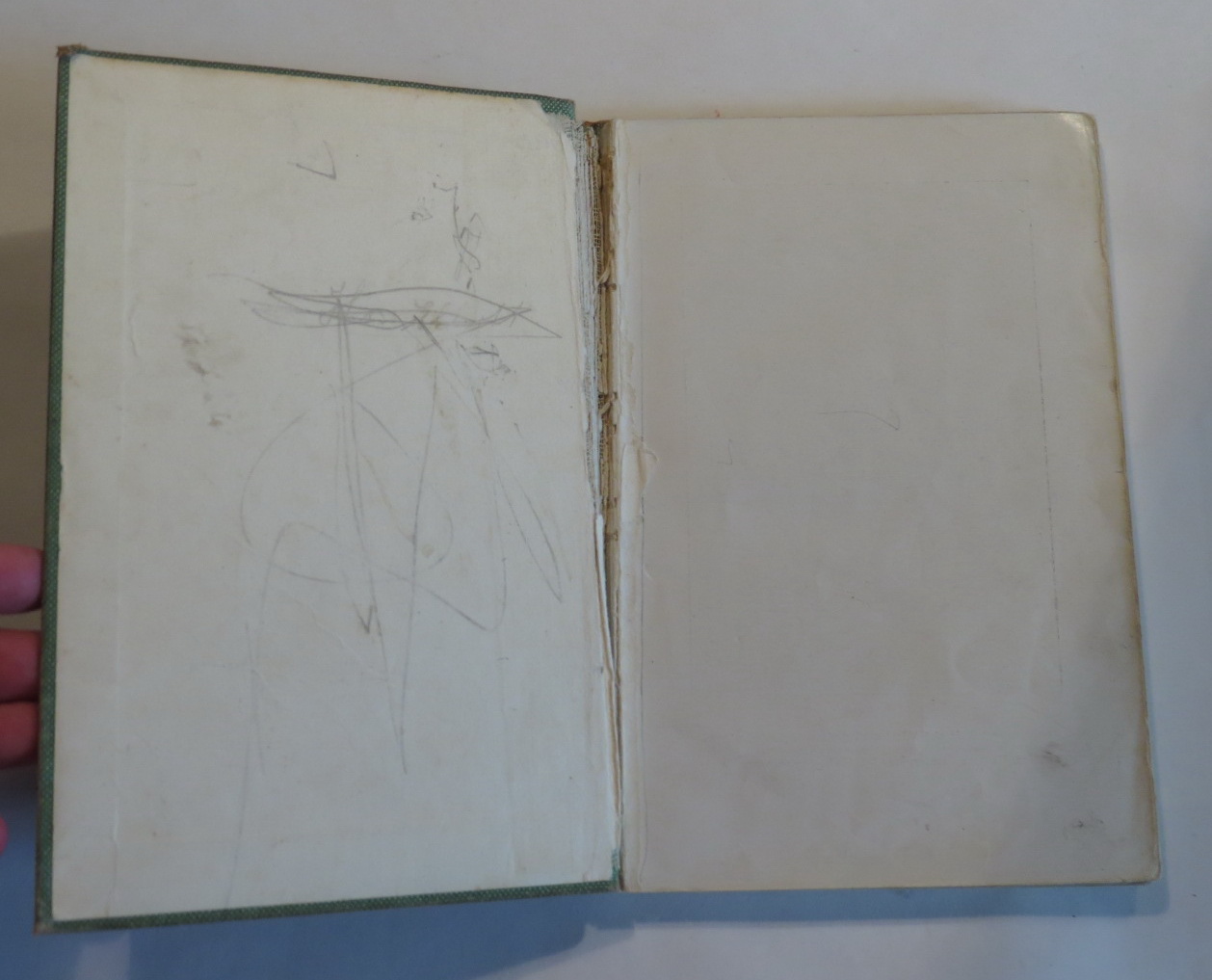 Binding poor. Lacking front and rear free endpapers. Hinges broken, with text block almost separated from boards. Pencil scribbles on front pastedown endpaper. Boards and spine rubbed, with loss of white lettering on front board. ; viii, 120 pages. Green cloth boards with illustration of Maori weapons and hei tiki on front board. Red-brown lettering on spine and front board, white lettering on front board. Page dimensions: 216 x 139mm. Illustrated. The illustrations include: Submerged Pa, Muruika, Ohinemutu; Major Te Pokiha and Wife; Hongi-Hika; The Witch's Rock; The Classic Pohaturoa Rock; Vanished Glores: Te Tarata Terrace. A collection of Maori legends and reminiscences. Text in English. Gilbert Mair was involved from 1867 to 1872 in the New Zealand wars, on the side of the New Zealand governement, and "in command of Arawa friendlies, to whom 'Tawa,' as he was universally known, was the ideal type of a soldier chief." - from the Preface by H. Brett. "Many years ago Captain Mair suffered an irreperable loss by the destruction of his great collection of manuscript matter in a fire in Wellington. In this disastser he lost the substance of long researches in Maori history and folk-lore [. . .] Had Captain Mair chosen to write of his military record, he could have given us a book of thrilling adventure, of perilous deeds almost without end. In the present volume, he, however, preferred to write chiefly of his beloved Maoris, among whom he spent the greater part of an extraordinarily well-filled life [. . .]" - from the Preface by Henry Brett. [Bibliographical reference: Bagnall M666 - "Stories of the Hauhau campaigns, Maori legends associated with the thermal regions and the Bay of Plenty, etc. and English visitors to these areas."]